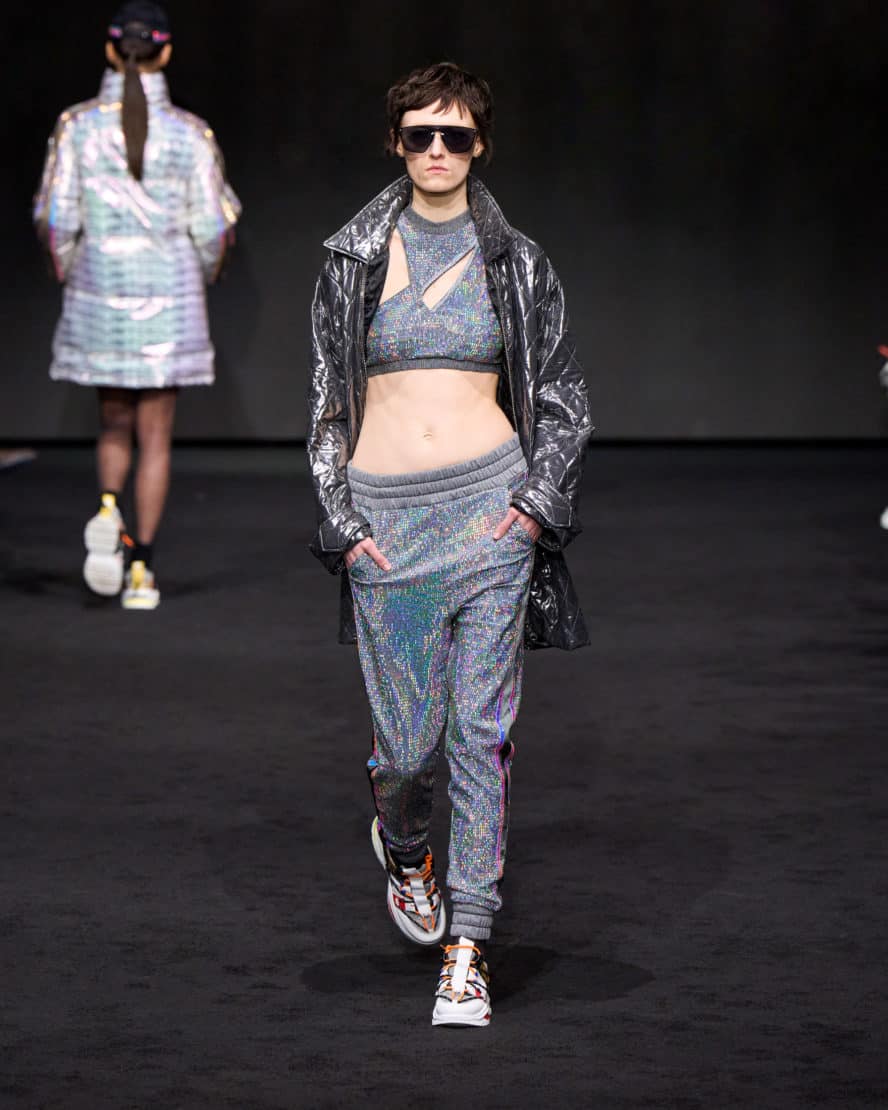 When the lights go down and the screen lights up, a fashion film starts on the grand display of the Ziegfeld Ballroom. The animated conversation of chattering attendees dissipates into silence, all focusing on what is about to be showcased. This premier event space in midtown Manhattan was at that moment ground zero for people across a broad range of sectors in the fashion industry, together with creatives, models, influencers, and enthusiasts. On the screen, young and edgy girls were wearing Custo Barcelona until the first live model emerges to walk down the runway. Custo Barcelona came into existence in 1996, and now, 26 years later—after two years of absence due to the pandemic—was presenting “Light Up” for the New York Fashion Week. This collection was a creative experiment defining a new language via a mix of different fabrics, and the show was produced by Art Hearts Fashion.

There was a resplendent variety of pieces in vibrant colors. Among a predominance of black and white purple and other cooler hues were shining, along with designs in radiant gold. Most outfits had a huge athleisure influence, intertwined with glam energy. That was perceptible in many holographic fabrics and sequin designs. Jaguar patterns stood out, reminding us that—after a time during which some trends from the beginning of the millennium had come to seem very outdated—a lot of them are now coming back strong. Volume was an essential aspect of these garments: turtlenecks, balloon and oversized sleeves with movement were hugely present.

Custodio and David Dalmau started their first fashion business at the beginning of the 1980s. At first, they dealt only with men’s shirts. Afterward, they evolved to include women’s as well. Finally—following a trip during which the brothers fell in love with the Californian lifestyle—they developed what would become Custo Barcelona. The designer brand has been showing collections for 25 years now; bright colors and detailed compositions have always been their specialty.

The Sunday show featured original and exciting tailoring, which included skin appearing through cuts in clothing. Much was mini: miniskirts and high rise short shorts; sweatshirts, and hoodies as dresses. The cut-out structures were often asymmetric, combining with black tights and exuding classic and sophisticated energy, despite the modern dominance.

Known for their prints, the sportswear brand is globally one of the most famous Spanish designer labels. It consistently manages to maintain the heart of the brand while impressing with every new season. Perennially distinguished by its rebel look, Custo Barcelona blends modernity with elegance and grows its devoted audience year by year. The intention behind the pieces showcased in this event was to encourage self-love and the embracement of one’s style. Both are consonant with the attitude revealed by the looks on the catwalk.

The pieces worn by the models—in sync with fast-paced music—manifested movement accomplished by the use of light fabrics and the savvy use of some heavier materials as well. Comfort was a noticeable aspect, and satin was very emphasized. Puffer jackets were stars that day. They came in many forms, long, with star designs, sometimes open and sometimes closed. Some showcased combinations included the duo jacket+top—a favorite for A-list It girls—and trenchcoats, and even a military glam look. The latter stood out as it didn’t follow the typical patterns, achieving the resemblance instead by means of creative colors and cut. Natural fibers formed part of the garments’ composition, together with more technical fabrics, through accented layers of clothing.

The ever-popular label Custo Barcelona created this collection for women boldly in charge of their own lives, women who live fully and who appreciate their place in the world. The brand once again displayed fine aesthetics among much embellishment, emphasized by their patchworks. Through many aspects, Custo Barcelona had—as ever—a strong and cognizant approach to what Fashion is evolving to, continuing—as they have been for many years now—to lead the way in the industry. 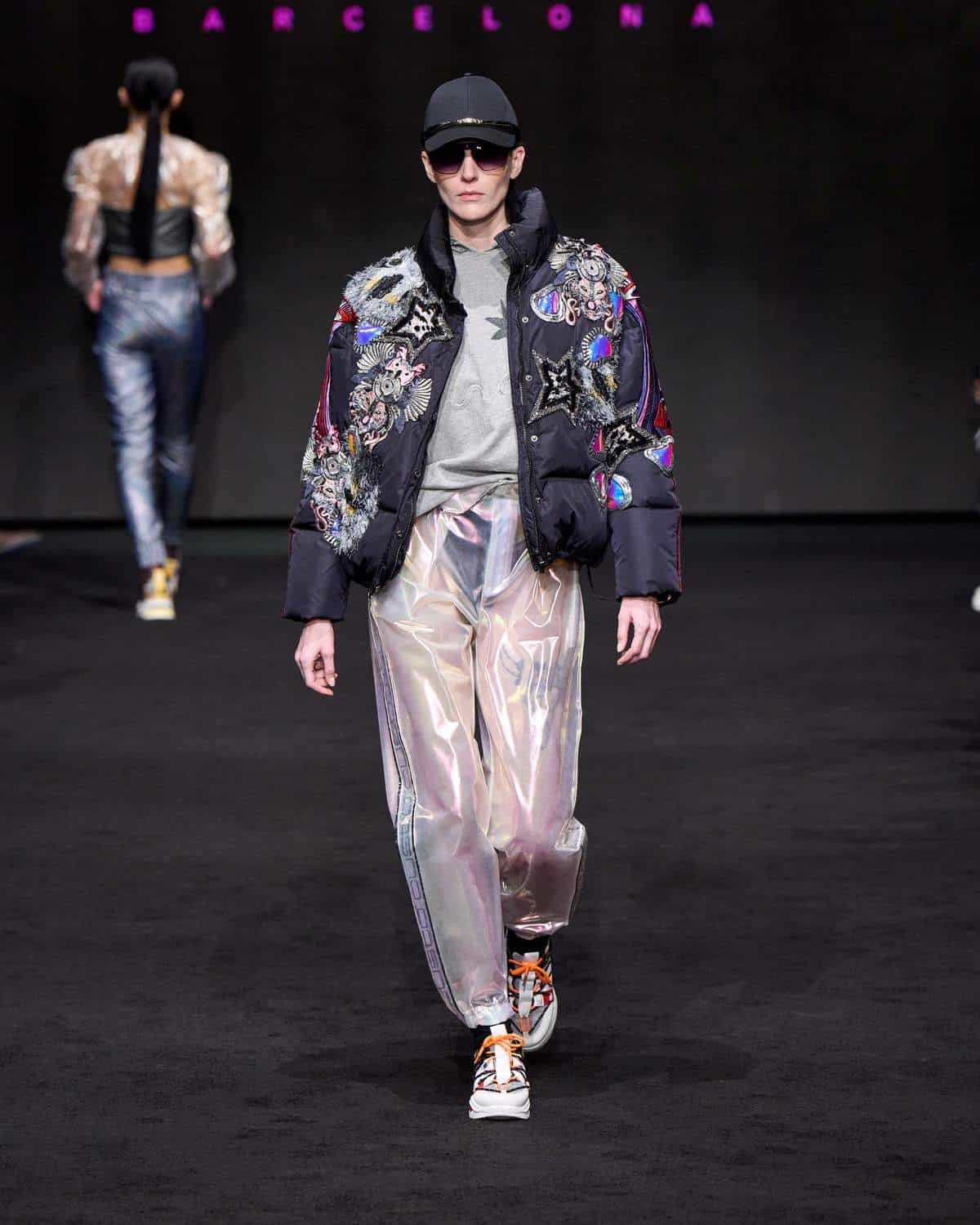 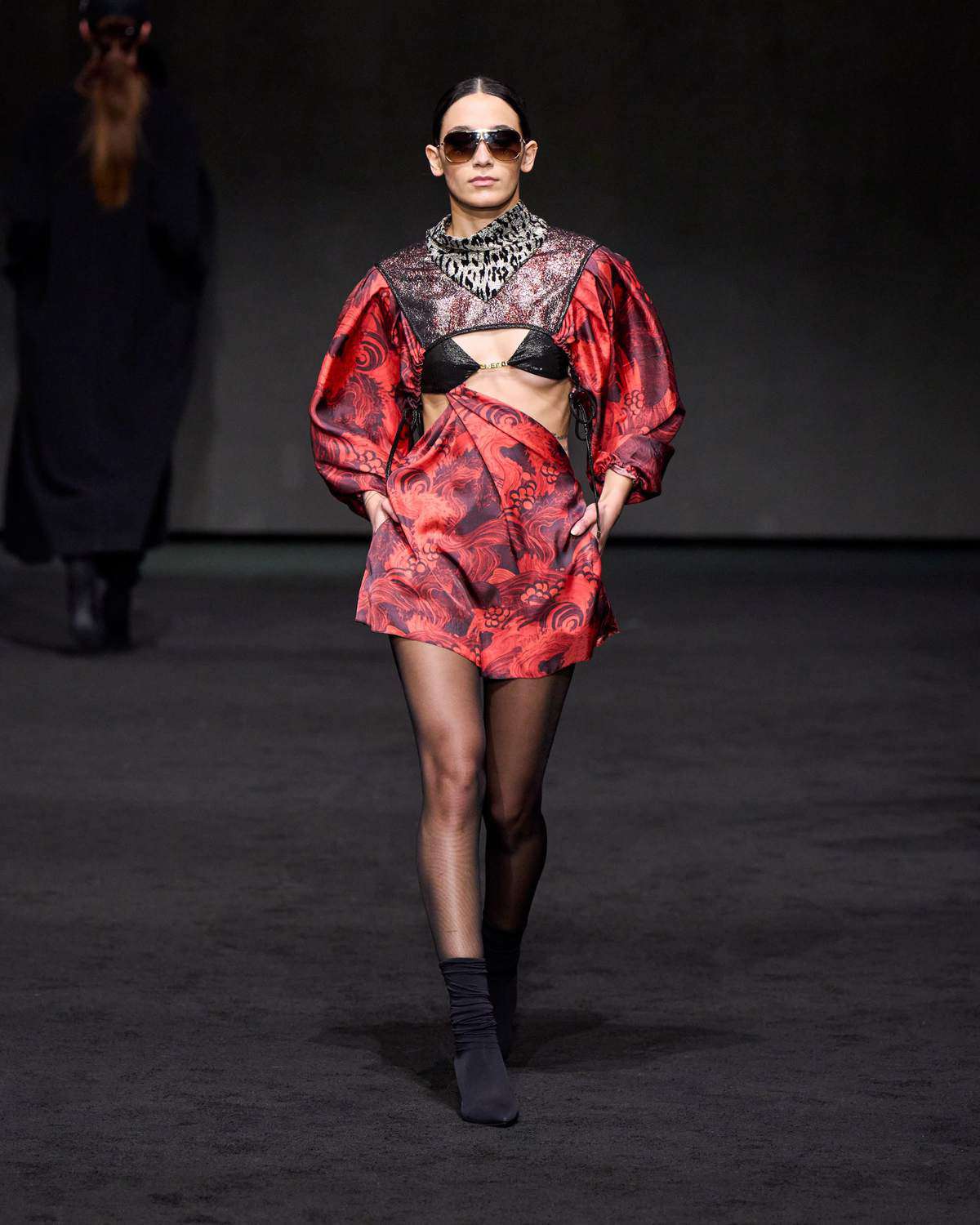 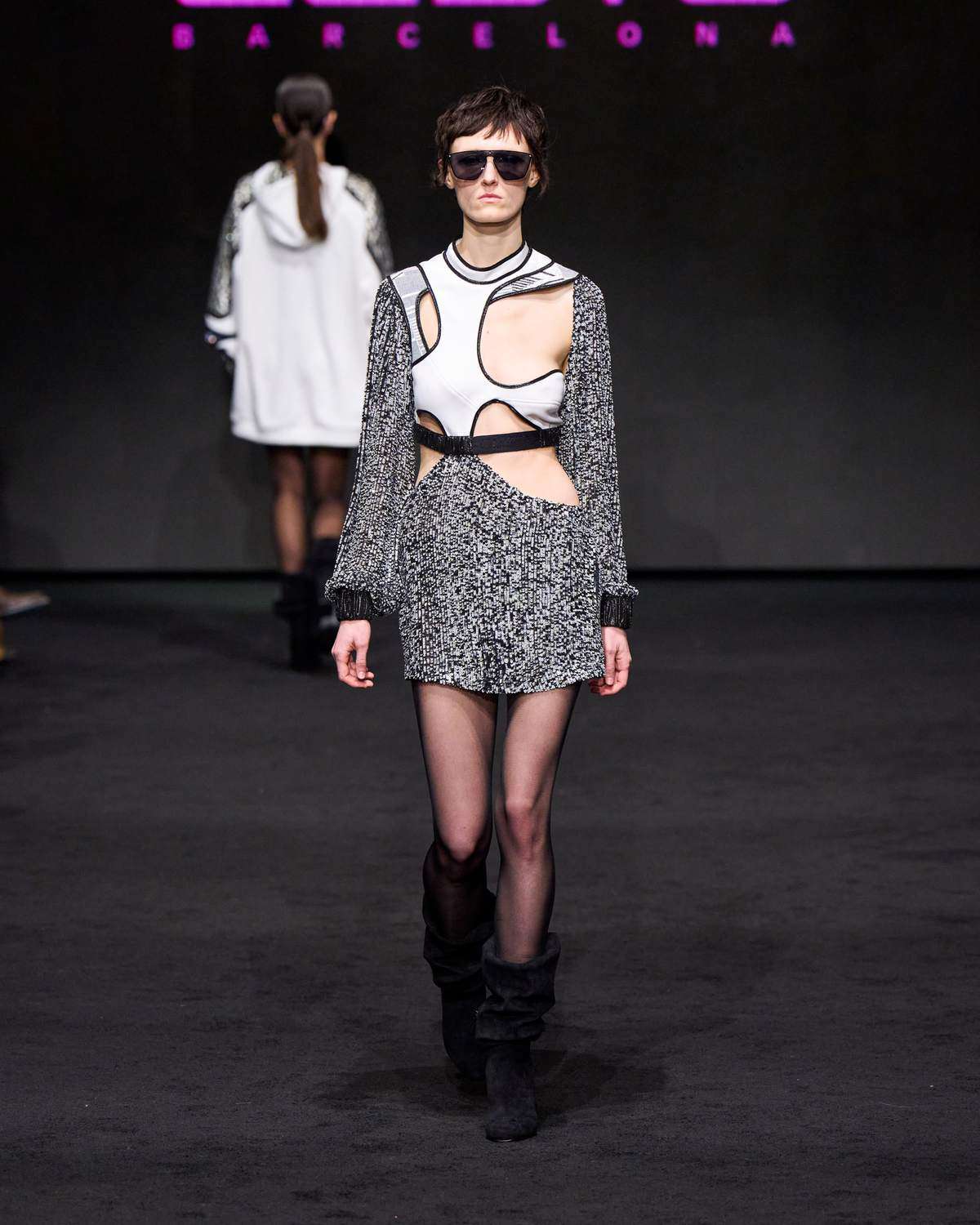 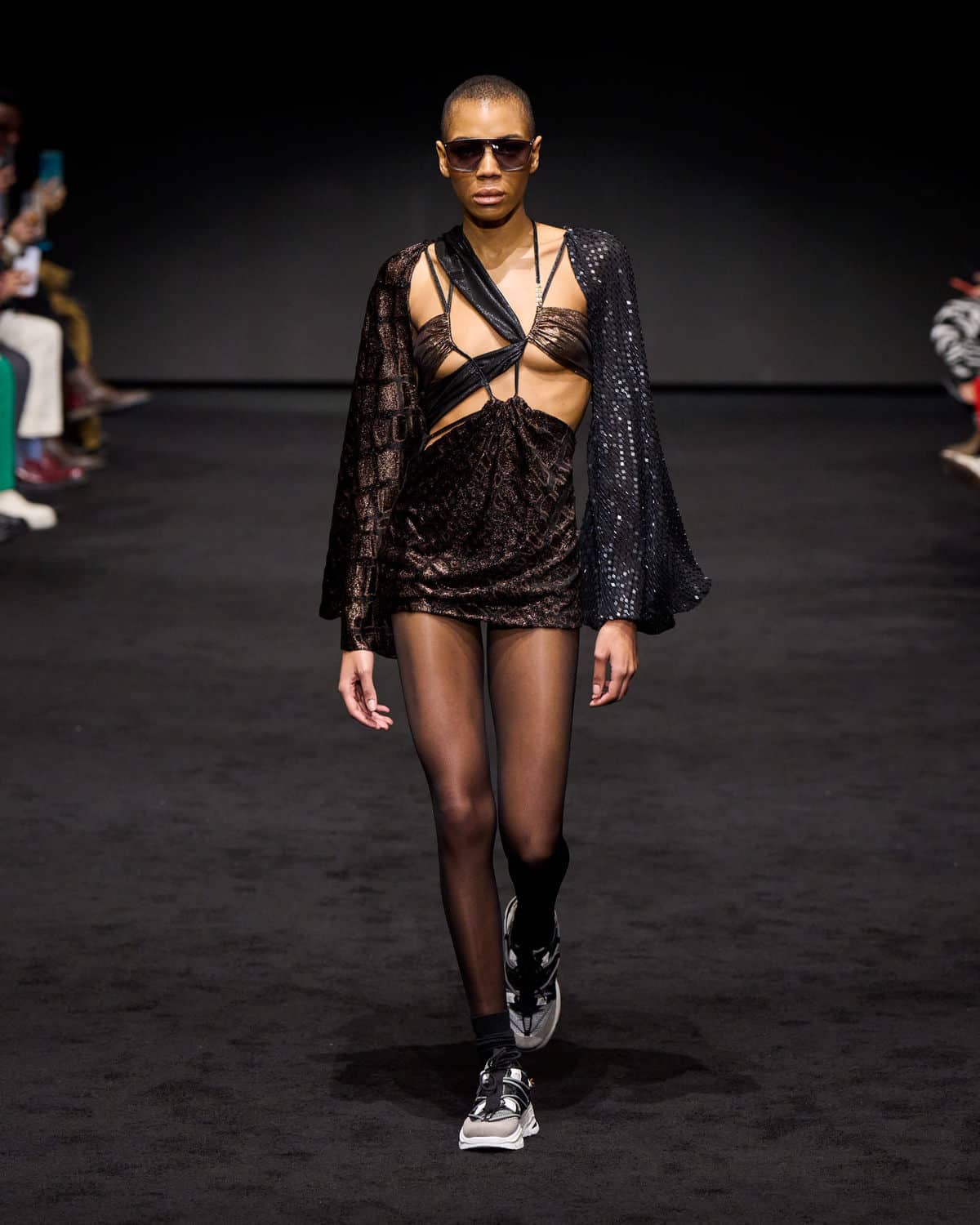 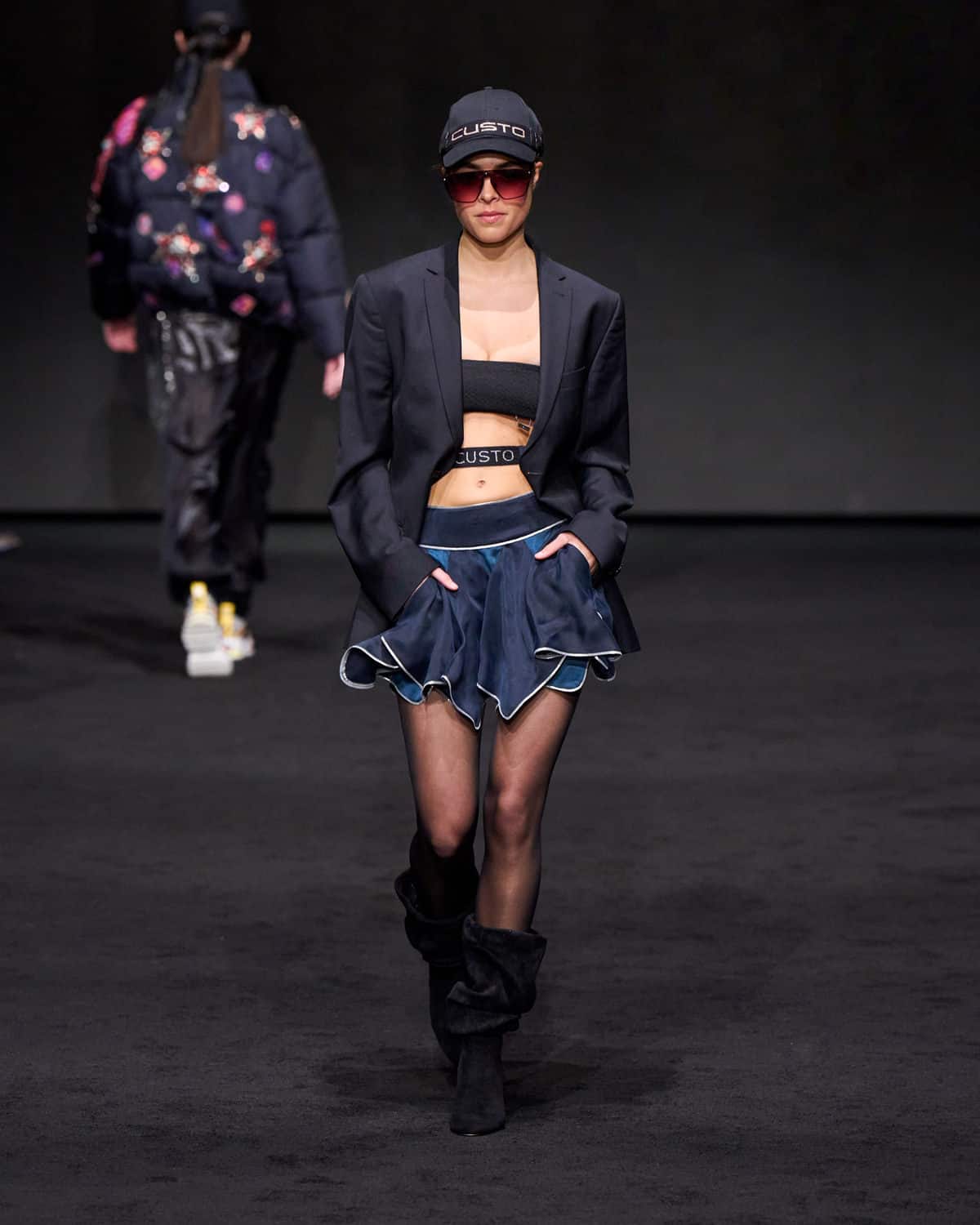 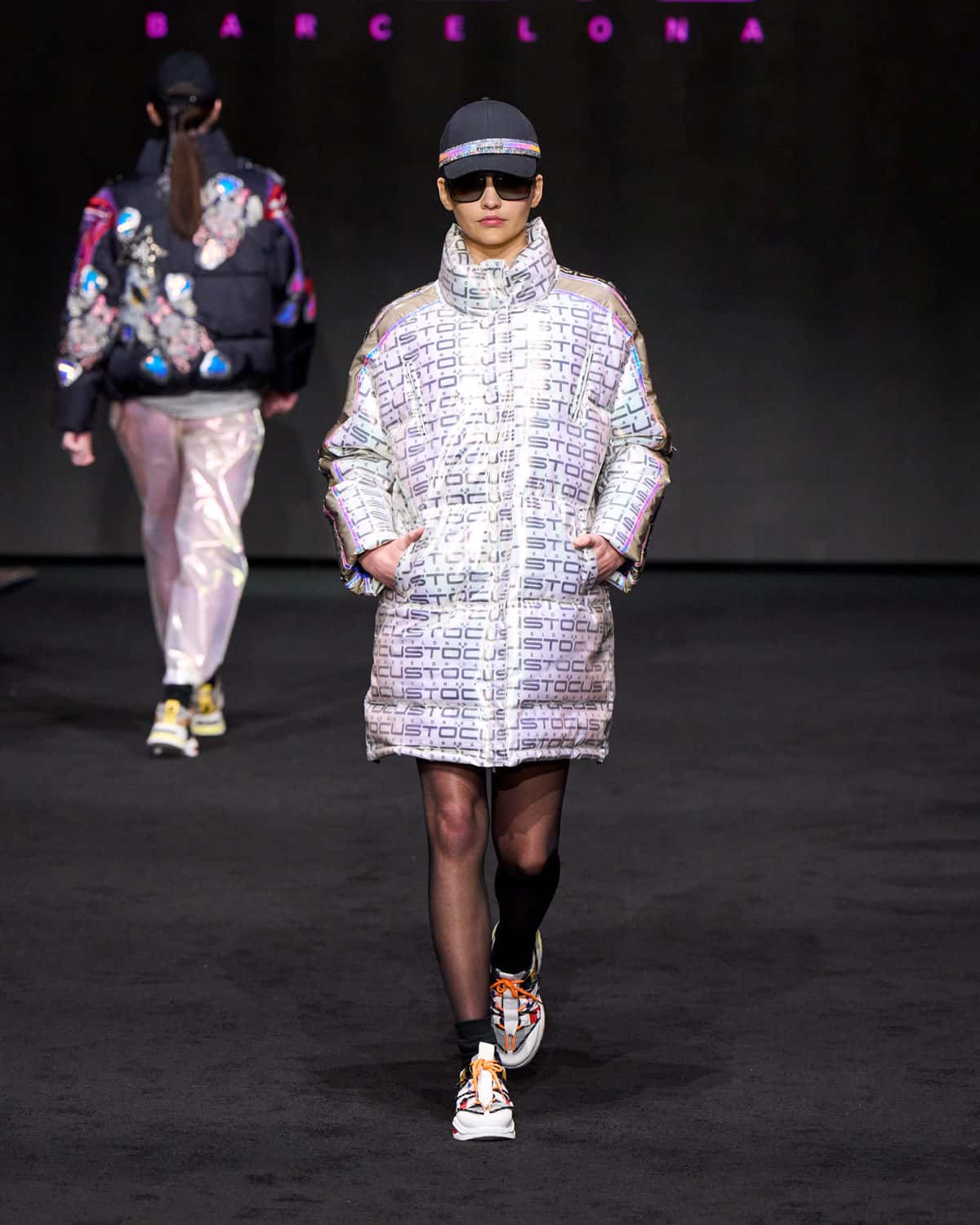 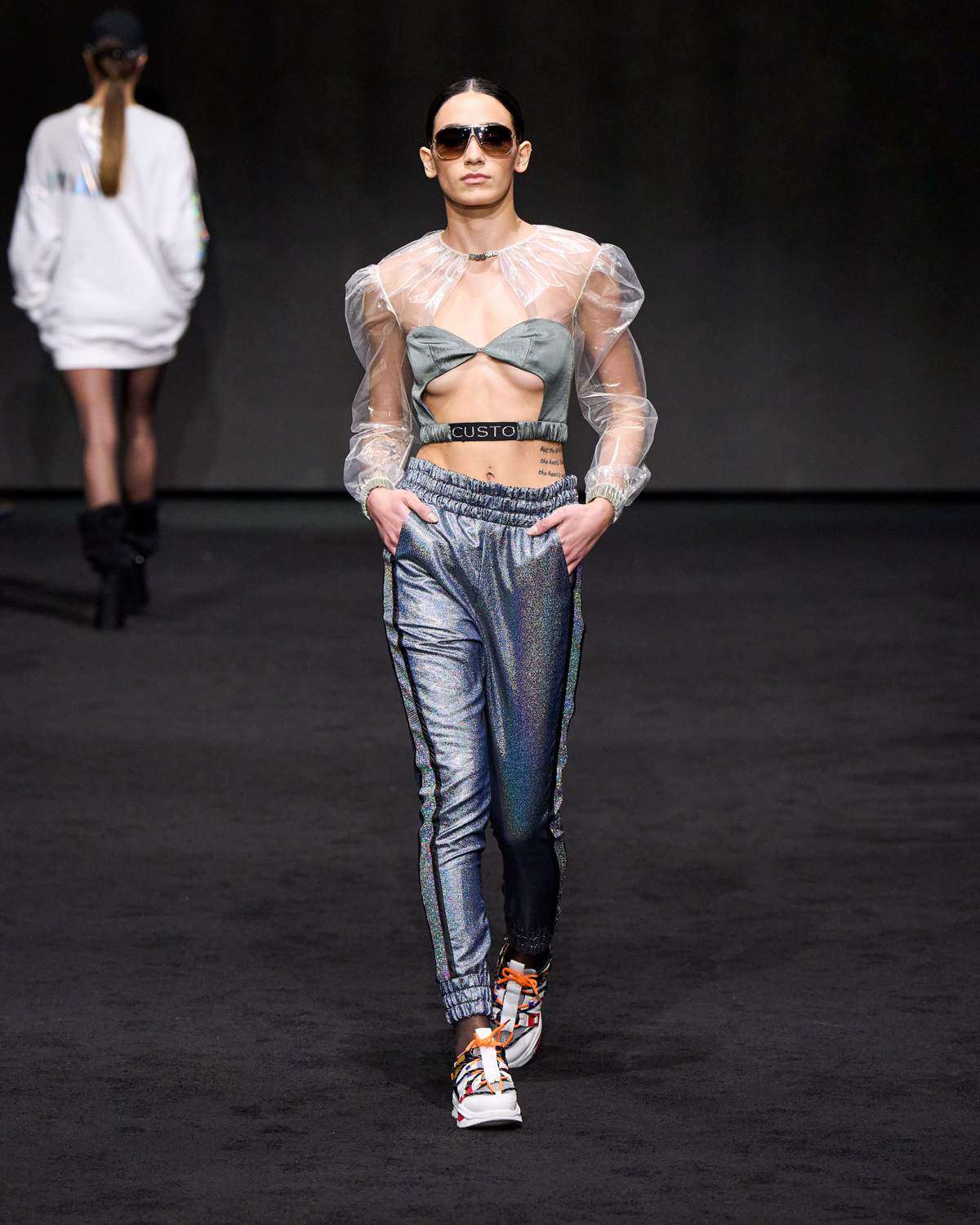 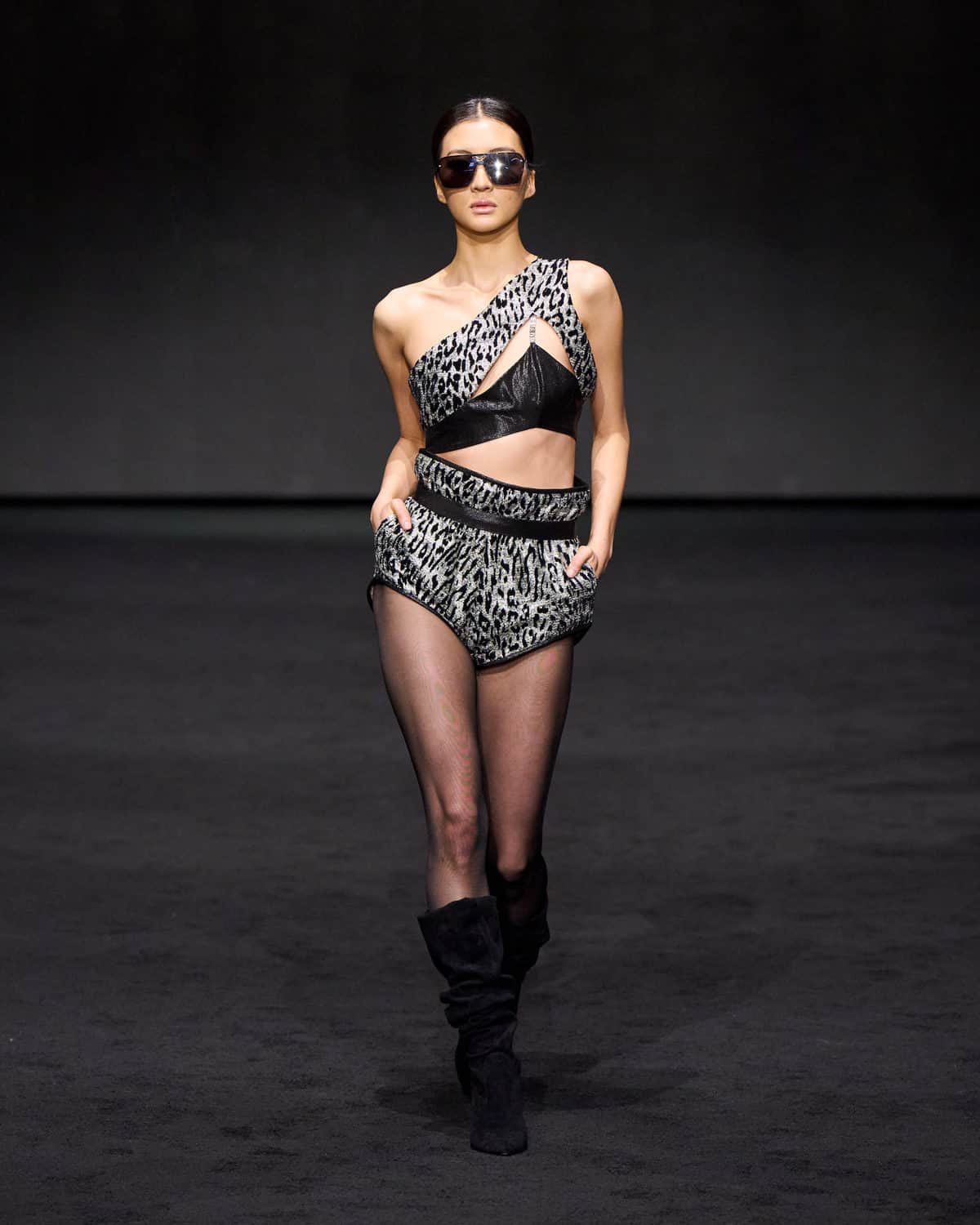 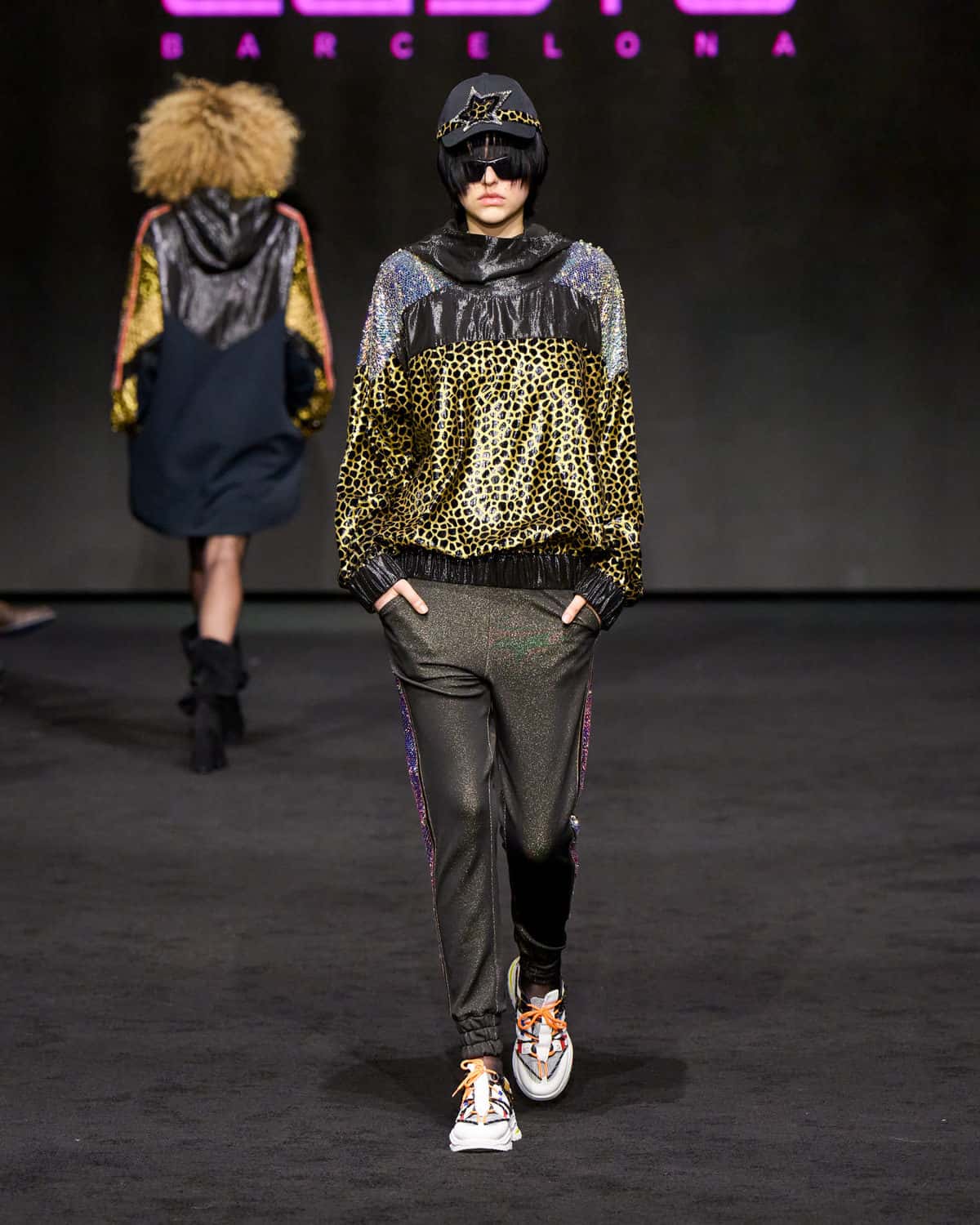 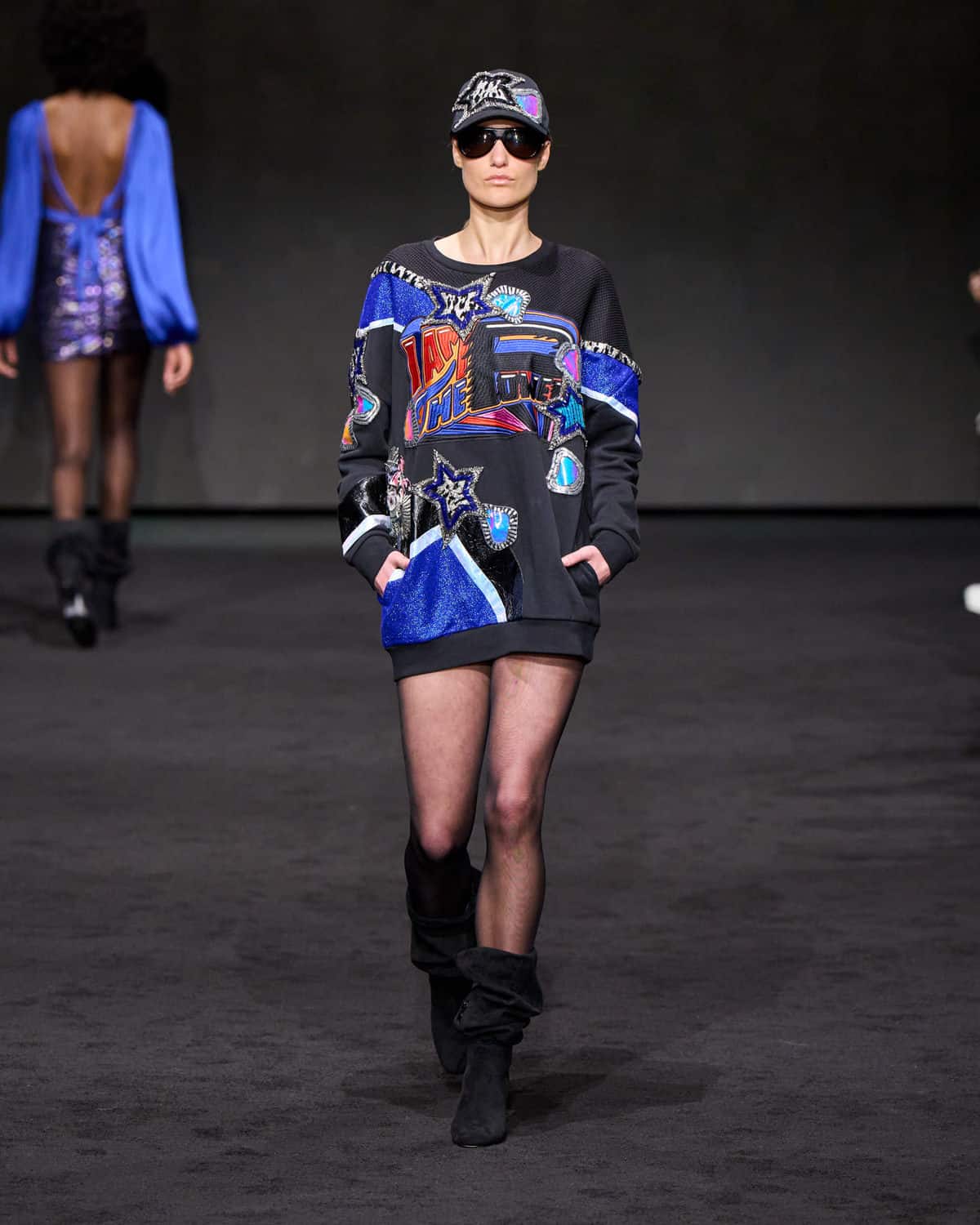 If you’d like to show your new collection at a notable fashion week, feel free to reach out to Fashion Mingle. We’ll assist you—working within your budget—in selecting of the best shows to work with. And we’ll introduce you to vetted fashion show producers.

Originally from Brazil, Victoria Roberts is a fashion writer with a background in marketing, styling, PR, and social media. Victoria moved to the United States to pursue a career in fashion journalism, and she is currently a student at Santa Monica College in Los Angeles.