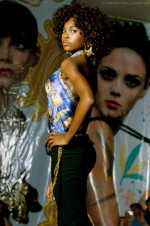 ​Ria Rivers was born in Fort Walton Beach, Florida, Eglin Air Force Base, in 1992. She lived in Florida for three years before her family moved to Okinawa, Japan for three years while her father served in the Air Force at Kadena Air Force Base, JA. Ria moved to San Antonio, TX at the age of seven and lived there throughout high school. Ria graduated from high school at Randolph Air Force Base and attended Texas Tech University in Lubbock, TX, receiving a Bachelor’s degree in Retail Management, Business and Interior Design.

Ria began her modeling career at the age of thirteen with Avant Model Agency, San Antonio, TX and soon after also signed with Sue Webber Productions, Austin, TX. Ria has grown up in the fashion industry and since starting her modeling career she has been casted in several fashion shows, print ads and has been training runway from the age of fifteen.

After graduating from Texas Tech University in December of 2014, Ria moved back to San Antonio to pursue her passion and longtime dream of opening a modeling school to teach runway and inspire the next generation of models.

Since the opening of NIQUE, Ria has trained numerous students in personal development and model development. Ria was contracted for Fashion Week San Antonio, and acted as the Casting and Model Coordinator for all fashion shows, including Rueben Reuel and Anthony Ryan from Project Runway. Ria also continues to be a working model, as well as casting and model coordinator for numerous fashion producers in San Antonio and surrounding area.