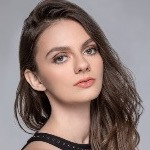 Faith Logan (SAG-AFTRA, AEA, AGMA) is an American actress, model, and singer. She received her Bachelor's Degree in 2015, her MBA in 2020 and has since appeared in numerous television shows, films, theatrical productions, commercials, and music videos. She can also be spotted on the runway (with several NYFW, Street Fashion Week, and NY Bridal Fashion Week shows under her belt) and in various editorial photoshoots. Logan is also a classically-trained soprano. (www.faithlogan.com)